Two islands, with an equal number of territories, create a bridge between the outer continents. Expect some fierce battles as control over the islands shift from player to player. 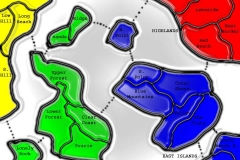