Four major continents make up the whole of this map. All of them have roughly the same amount of territiories, making dominance over other players extreemly difficult. 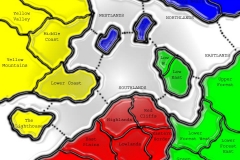