Make your own Snakes and ladders game. Snakes and Ladders or Chutes and Ladders is an ancient Indian board game regarded today as a worldwide classic. It is played between two or more players on a game board having gridded squares. A number of “ladders” and “snakes” (or “chutes”) are pictured on the board, each connecting two specific board squares. The object of the game is to navigate one’s game piece from the start (bottom square) to the finish (top square), helped or hindered by ladders and snakes, respectively.

Make your old variation on an old poster of large picture. You can also draw your own tower or ladder grid. This is already part of the fun.

This ladder game is drawed on a town-picture and the goal is to climb to the highest tower. 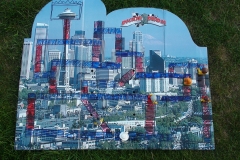 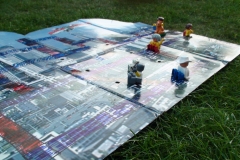 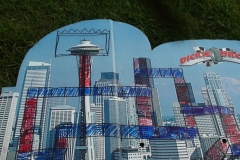